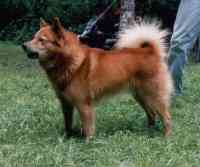 The Karelo-Finnish Laika is the smallest Laika of Russia. Smallish red-coated Spitz has been a common hunting dog of peasants in Poland, Finland, Karelia and northwestern Russia since very old times. In the past, in Poland and Russia, red-coated Spitz was crossed with scent hounds to improve winter coat of the hounds. Despite presence of diverse introduced breeds in the home range of these dogs and interbreeding, local hunters liked their small red-coated Spitz dogs and bred them more or less pure until 1930. Traits of these dogs still can be seen today in the appearance and hunting enthusiasm of smallish local mongrels seen on streets of villages of northwestern Russia.

Origin
Major centers of formation of the breed in Russia were Petrozavodsk, Moscow and Leningrad. In 1930-1940 of XX Century, near Medvezhyegorsk, Karelia, a Government’s Kennel raised small red-coated Spitzes pure. Although conformation of these dogs was not perfect, the Kennel together with enthusiasts among local hunters helped to increase number of similar looking dogs. During World War II, many dogs were lost. In 1951, in Petrozavodsk, there were 24 registered dogs. Majority of them was lost to rabies. In 1953, Russian cynologists imported two males named Bodryi and Sokol and one female named Pika of the Finnish Spitz from Finalnd and crossed them with still remaining red-coated small Spitzes found in Southern Karelia and northern provinces of European part of Russia, the Olonets Laika and the Karelian Laika. In Leningrad, local dogs used for breeding were proven good at hunting and had conformation very similar to the Finnish Spitz. In the beginning, the breed was named the Finno-Karelian Laika and then, the Karelo-Finnish Laika. In Moscow, Finnish Spitzes imported from Finland were also used. By 1970, in Moscow alone, total number of Karelo-Finnish Laikas was about 200 dogs. Other breeders often used Finnish Spitzes imported from Finland. Voilochnikov and Voilochnikov (1982) admit that the Karelo-Finnish Laika is closely related to the Finnish Spitz and is naturally similar to it. However, there are some differences. Among Finnish Spitzes there are many dogs raised for generations by not hunters only as show dogs and this weakened the hunting ability in some show lines. Developing the Karelo-Finnish Laika, Russians wanted to get a portable dog strictly for hunting purposes. It was intended to be versatile, with endurance for work in harsh climate and with beauty of the Finnish Spitz. Actually, the Karelo-Finnish Laika is a sibling breed of the Finnish Spitz. Some subtle differences include somewhat closer to the body guard hair, a wider variation of the intensity of the red coat color and presence of white markings on the chest in many dogs. Carriage and curving of the tail over the back is not very strict allowing some variation. This is a healthy genetic variation that existed among local dogs in their aboriginal state.

Coat
Coat of the Karelo-Finnish Laika is a double coat of straight harsh guard hairs and soft thick undercoat. By comparison with the Finnish Spitz, the coat of some of the Karelo-Finnish Laika is closer to the body. The coat color allowed by the standard is only red of various shades, but pale red is not desirable. The red color is lighter inside ears, on cheeks, chin, lower part of the chest, abdomen, inner side of legs and lower side of the tail. White spots are permitted on the chest and tip of the tail. A white longitudinal marking is also allowed on the forehead. In the Karelo-Finnish Laika white spots may be larger than in the Finnish Spitz. Black tips of guard hairs on the back and near tip of the tail are also allowed.

Breeding
Females of the Karelo-Finnish Laika mature by age of eight months have estrus two times per year and give birth to one-seven puppies per litter.

Barking
Some hunters report that the Karelo-Finnish Laika is less barky than the Finnish Spitz. Nevertheless, it is the most excitable Russian Laika and barks by any slight reason.

Attitude to humans
Karelo-Finnish Laika is an affectionate and friendly with the family dog. Howevber, he is often aloof and mistrustful with strangers. Some dogs guard their masters and their property. They always warn by barking, when someone is coming. According to Laika experts and owners of these dogs in Russia, they should be treated with patience, because of their sensitivity to the mood of the master. Once beaten, the dog becomes sulky and refuses to come up when called. This may last for a few days and some dogs become permanently mistrustful with the owner.

Attitude to other dogs
The Karelo-Finnish Laika is aggressive to unfamiliar dogs coming close to the house where they live. They live well with adult dogs and puppies of the same household and never start fights with dogs met far away from home. This makes them convenient to be taken for a walk in a city park and other places open to people with their dogs.