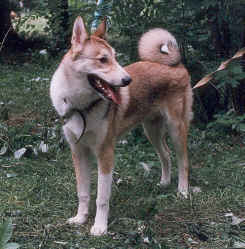 There is no a clear border on the map marking the distribution of the West Siberian Laika and the East Siberian Laika. We can talk only about locally predominant types of dogs. In fact, dogs similar to Laika of Mansi and Hanty were also found with native people living in far scattered places of East Siberia. East Siberia is a vast country and on its territory there are many types of aboriginal dogs used for sledding, hunting, driving reindeer or for all these jobs combined. East of Baikal Lake and further to the Russian Far East, in the Amur River basin and Maritime Territory large and sturdy built Liakas used for hunting all kinds of local animals live. These dogs became distinguished as a purebred named the East Siberian Laika.

Origin
The East Siberian Laika originated from dogs sampled in the Baikal Lake region, Irkutsk Province, Evenki National Territory, the Amur River basin and Maritime Territory. In the East Siberia, Neolithic fossil remains of dogs are known. Judging by the Spitz-like appearance of local dogs it seems most likely that they have been brought by tribes migrating from the west. However, migrations from Mongolia and China also occurred and this is probably one explanation of certain traits of Chinese and Japanese dogs among aboriginal Laikas living in areas of lower Amur River and Vladivostok. Laikas of these parts of East Siberia are quite diverse in such traits as size, head proportions, size of ears and shape and carriage of tail. Some of this variation still remains in the East Siberian Laika as a purebred.

A wildlife biologist K. G. Abramov put the first breed standard of the East Siberian Laika. It was based on the predominant type of Laikas living in the Amur River region that were used for hunting and puling sleds. It emphasizes the rangy body, powerful bone and a coarse head with a powerful muzzle. This standard remained active until 60th. However, there were many large, but light built with nearly square dogs in East Siberia used exclusively for hunting. Both types were interbred producing wide variation in the breeding stock of a new established breed. By 70th, pure types of aboriginal Laikas in East Siberia began disappear near big cities, along railroads and closer to the Amur River. Then, systematic breeding of the East Siberian Laika with pedigree registration began in Irkutsk Government’s Kennel. At the same time, pure breeding of the East Siberian Laika was done in Leningrad. In 1979, according to Voilochnikov and Voilochnikov (1982), in All-Russian Stud Book of Hunting Dogs, there were 39 East Siberian Laikas recorded. In the Irkutsk Kennel, major breeding males were Julbars and Bulka. Julbars was purchased in Kachug District, Irkutsk Province. He was a big dog. His coat color was black with reddish shade and white sable pattern. His head was coarse, with bulky muzzle slightly shorter than the skull. Bulka was rought from Evenki National Province. He was as big and powerful as Julbars was. His coat color was black and white. His muzzle was short and bulky, skull was rounded on the top and ears were small. In Leningrad, majority of East Siberian Laikas was different. These dogs were light built, with slender head and with long wedge-shaped muzzle resembling the West Siberian Laika. Actually, both types of Laikas were used in the breeding program of the East Siberian Laika, which resulted in some variation within the breed remaining until present. This may be an anathema for a dog show oriented breeder, but it beneficial for genetic health of the breed.

Coat
Coat is medium long double coat with straight harsh guard hair and soft, thick woolly undercoat. On the neck, shoulders and around the head hairs are longer, forming a ruff, which is particularly developed in males. On feet hairs form a brush between toes. On the tail hairs are longer, particularly on the lower side, but without feathering. Coat colors include black and white, totally uniformly black, gray, red and brown of any shade. The breed standard prefers sable black with symmetric pale pattern on the head, neck, chest, lower side of the body, and inner sides of legs and tail. Ticking on legs of same color as body is allowed.

Attitude to other dogs
The East Siberian Laika has a strong territorial instinct. Therefore, it will meet with aggression any unfamiliar dog of the same sex coming close enough to its own house area. A dog that is aggressive on and near his owner property may be reluctant to visit other places where aggressive dogs live. East Siberian Laikas are strong and skillful dog fighters, but they do not make good pit fighting dogs, because they do not fight only to solve their problems, not for sport of killing other dogs. For example, the fight may brake out over a home range territory, a potential mating partner, unfinished food, a dominant status, etc.

Attitude to domesticated and wild animals
The East Siberian Laika is a natural hunting dog highly aggressive to big predators. It is easy to teach not chase farm animals and pets. Like with many hunting dogs, rabbits and cats seem most tempting to them. Cats living in the same household are easily accepted and left alone, but other cats coming nearby will be chased and treed like game. Rabbits should be kept in sturdy dog proof cages in a well-fenced area or in a barn with closing doors.

Utilization
The East Siberian Laika is a hunting dog with a strong natural instinct to hunt big and small game. In Russia, they are used to hunt a diverse game, from squirrel, marten and sable to moose, wild boar and bear. During the hunting search, a typical gate is a trot alternating with gallop. Strength and endurance of these dogs allow them to work fast in deep snow, tall grass, and swamps, on a rocky terrain or swim at near freezing point temperature.

Besides being very efficient hunting dog, the East Siberian Laika is a good sled dog. It can be taken to a hiking trip as a companion dog, if its hunting desire is not seen as a nuisance. During hiking, camping or near the farm house at home, presence of the East Siberian Laika is helpful, because this dog will detect and bark aggressively at dangerous predators, such as mountain lions or bears. The dog will harass the intruding predator by making threatening dashes and forcing it to defend itself, to tree or flee.

The East Siberian Laika does not fit to live in a city unless it is taken often for a free run in a safe place. Being exercised free regularly this dog will be in a good physical shape, content and obedient even if it lives inside, penned or chained.